Today we are extremely happy to finally announce Docusaurus 2.0! 🥳️

At Meta Open Source, we believe Docusaurus will help you build the best documentation websites with minimal effort, letting you focus on what really matters: writing the content.

After 4 years of work, 75 alphas and 22 betas, the next generation of Docusaurus is ready for prime time. From now on, we now plan to respect Semantic Versioning and will release major versions more frequently. 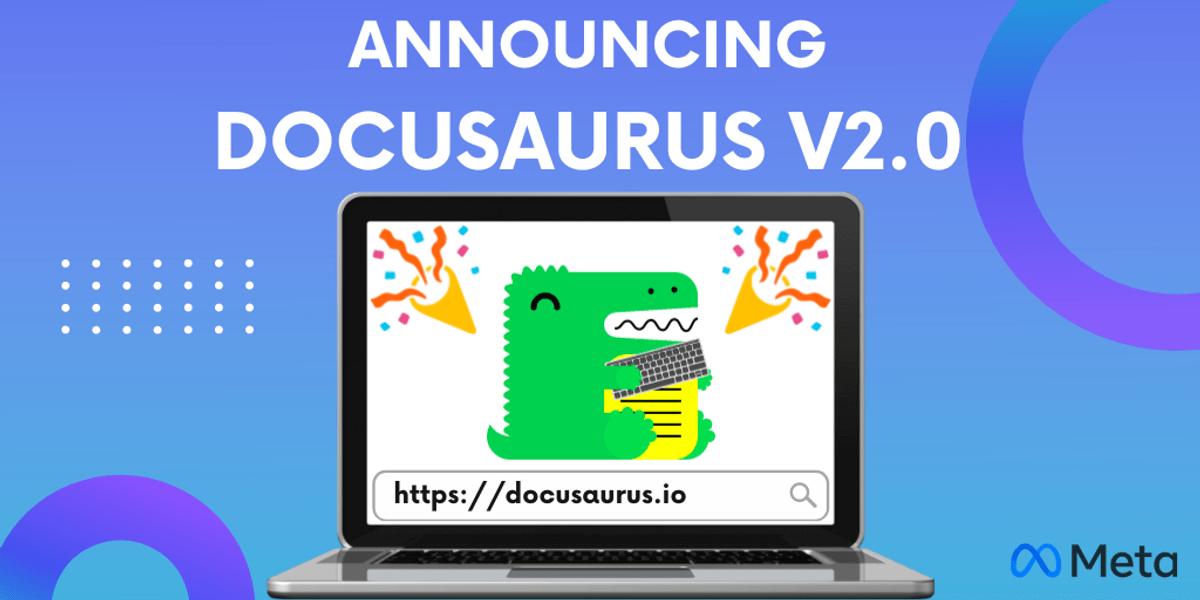 We are on ProductHunt and Hacker News!

Now is the best time to show your love for Docusaurus!

In a hurry? Check what's new in Docusaurus 2.0!

What is Docusaurus exactly?​

Docusaurus is a static site generator that helps you ship beautiful documentation websites in no time.

Focus on your content: just write Markdown files. Docusaurus will generate an optimized website for you that's easy to host anywhere.

Docusaurus is full-featured and very flexible: we ship with well-designed docs and blog layout, as well as out-of-the-box versioning, search, and internationalization functionalities, with a call to accessibility and search engine optimizations. Its flexible theming system permits to adapt the UI to match your branding so that it integrates nicely with your main website or documentation portal. Its usage of React enables a modern client-side navigation, and the ability to build an interactive documentation.

The Docusaurus philosophy is akin to the Pareto principle: you can get 80% of the results for 20% of the effort. This enables you to compete with top-notch documentation sites with minimal effort.

Docusaurus aims to be the best documentation tool, but you can use it for other use-cases as well: a blog, a knowledge base, a developer portfolio, a second brain, or even to scaffold landing pages!

The story behind Docusaurus​

Docusaurus was created at Facebook Open Source in 2017 (now Meta Open Source). We had a lot of internal and open source projects to document. It's complicated enough to write good documentation, let alone to create the HTML, CSS, and JavaScript for a good-looking website. We wanted project leaders to be able to focus on the content, and Markdown is great for that.

At that time, our solution was to copy/paste a Jekyll template over and over again. This naturally became hard to maintain, so we created a tool to solve our own pain once for all.

It quickly built momentum at Facebook and in the frontend ecosystem, adopted by many popular projects such as Prettier, Babel, React-Native, KaTeX, and of course Docusaurus v1 itself.

Notice that the sample sites above use different colors, but still look quite the same.

Docusaurus v1 has been very successful, but we started to question some architectural choices:

Docusaurus v2 was rebuilt from the ground up with a new modular architecture:

Despite being in pre-release, it didn't take long for Docusaurus v2 to outgrow Docusaurus v1 in terms of NPM downloads: 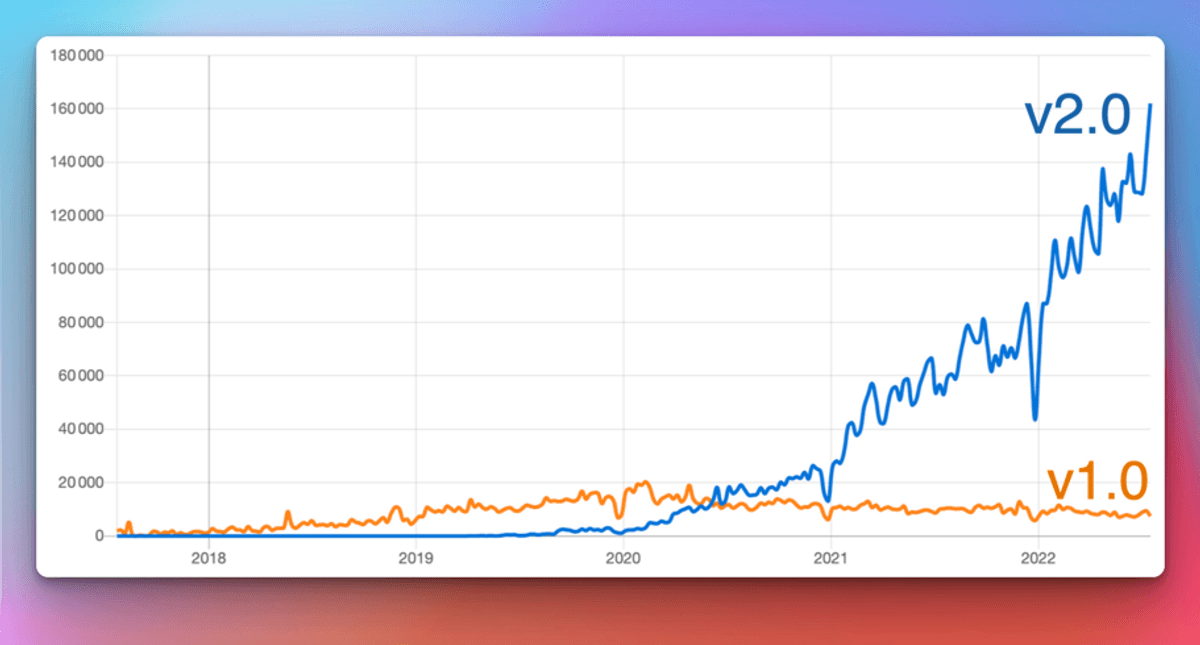 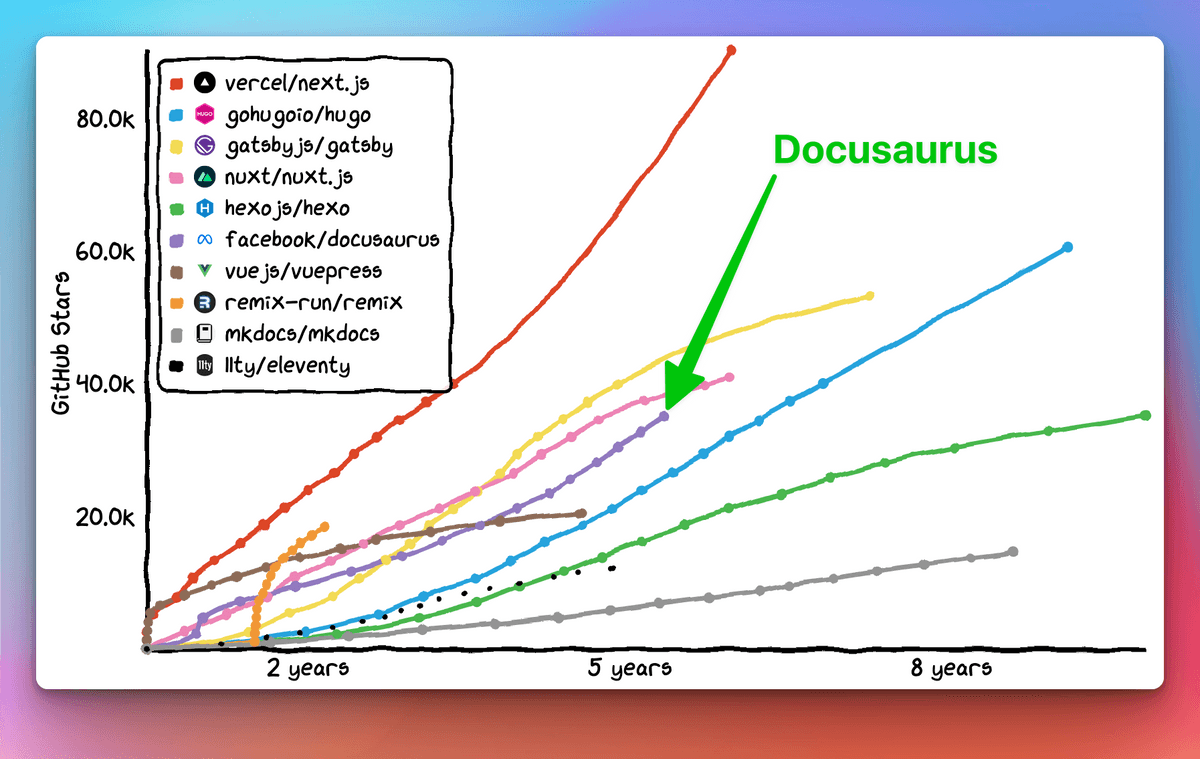 Today, Docusaurus v2 has already been a great success even before its launch:

Please add your site to our site showcase! It only takes a few seconds: just post a comment here.

It would be difficult to describe every single new feature coming with Docusaurus v2. Let's focus on the features we believe are the most impactful.

MDX allows you to interleave React components in Markdown. This enables you to build top-notch interactive documentation experiences very easily.

A demo is worth a thousand words:

Give it a try: press that button!

MDX has its own plugin system. You to customize your Markdown authoring experience, and even create your own Markdown syntax.

Our goal is to make Docusaurus very intuitive to use. We added file system conventions, and adding a doc page is as easy as creating one Markdown file.

Docusaurus now has a modular architecture with a plugin system — our core features like docs, blog, pages, and search are all powered by individual plugins.

More importantly, it enables our community to enhance Docusaurus with additional features. 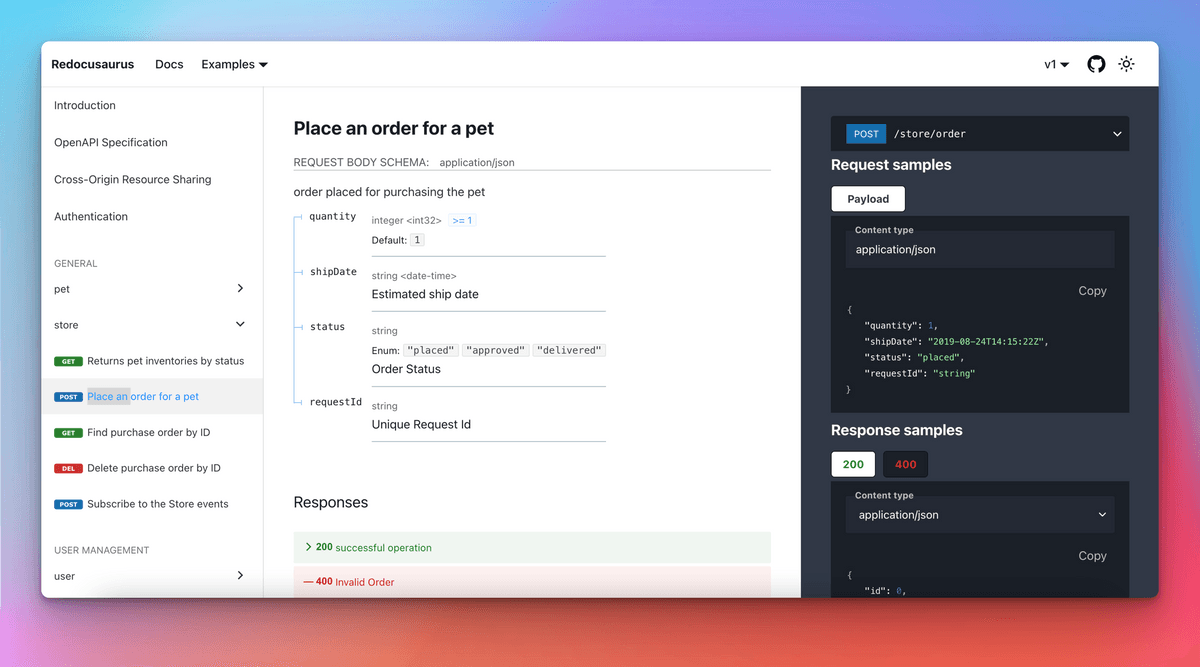 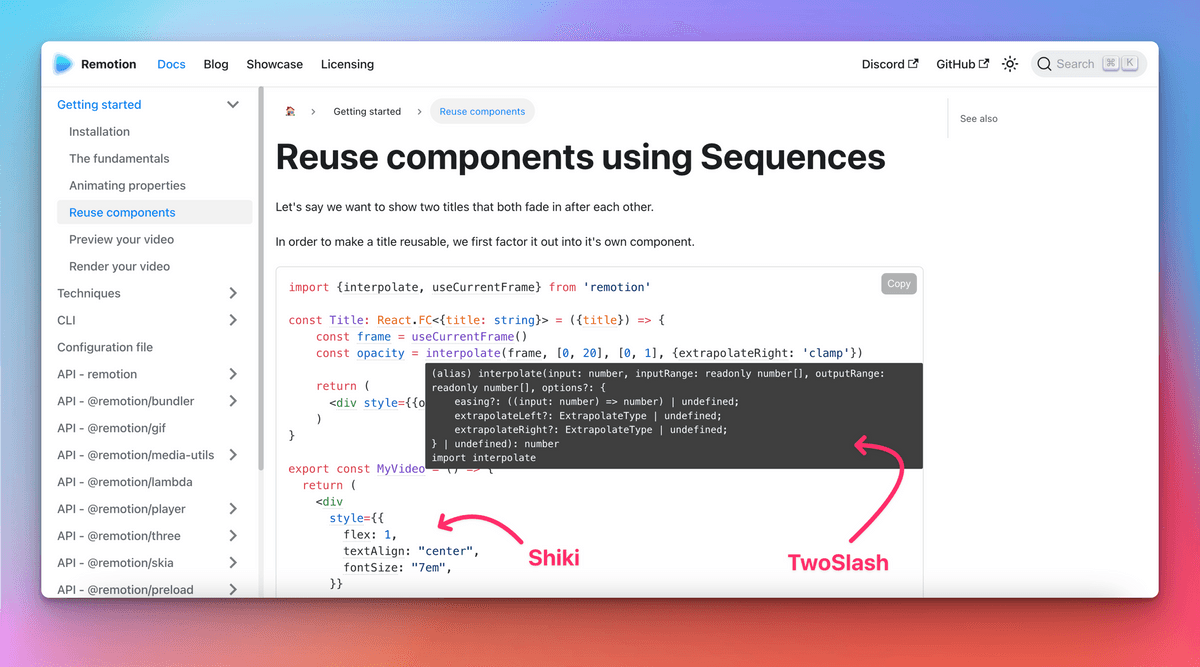 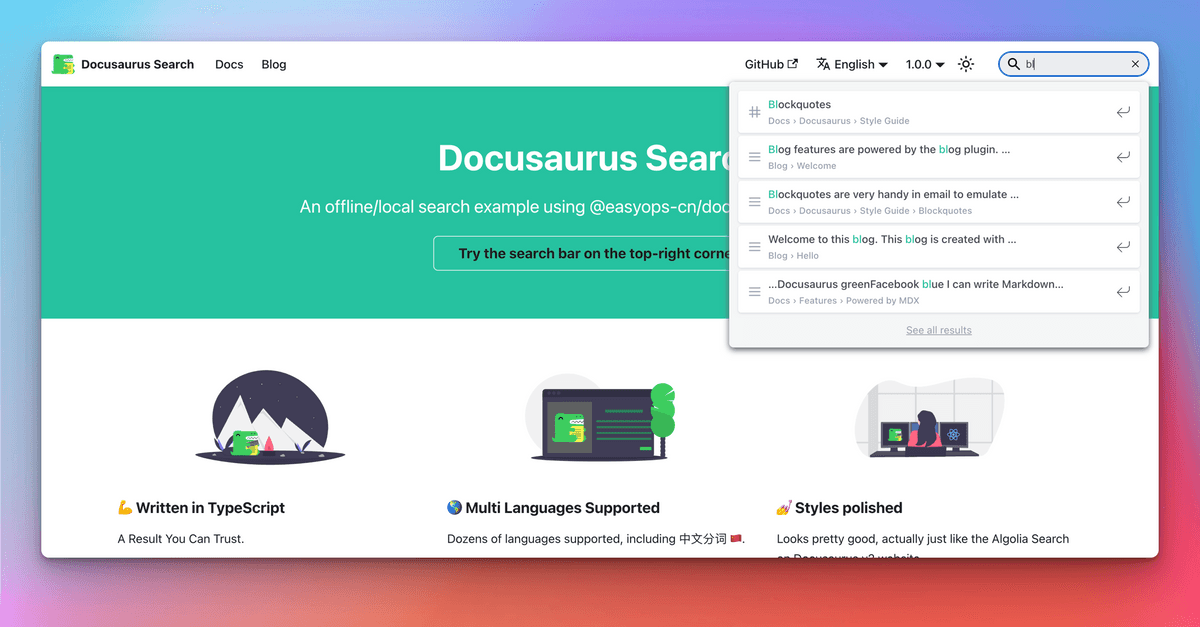 We have a curated list of outstanding plugins in our community resources page.

Theming is one of the most important features of Docusaurus: we believe a professional documentation site should respect your company's branding and create a consistent experience.

Docusaurus theming gives a lot of flexibility on multiple levels:

This enables users willing to invest a bit more time on customizations to build sites that look different from others.

Docusaurus 2 comes with a very long list of useful features:

Many enthusiastic followers of ours have been curious why it took us 4 years to release Docusaurus 2.0, considering the beta is already successful and widely used in production.

The reason is that we aim to respect Semantic Versioning, which means we will be incrementing the major version number whenever we release a breaking change.

It is important for multiple reasons:

The problem is that our flexible theming system inherently creates a very implicit API surface on which it is hard to know what is a breaking change in the first place. Highly customized Docusaurus sites sometimes have a hard time upgrading Docusaurus because they achieve customizations using internal APIs. We dedicated time to extensive theme refactors and clearly defining our public API, so that future code changes can be made more safely. We will continue to expand this public theming API so that the most common site customizations do not need to use any internal API.

The work on Docusaurus 3.0 has started, and this next version will be released only in a few months. We will backport retro-compatible changes in Docusaurus 2.x minor versions to make them available as soon as possible to the community on a stable channel.

A sample of the features on our roadmap for the upcoming major versions of Docusaurus:

We'd like to express our gratitude to all our contributors, including:

We'd like to thank in particular all our Docusaurus 2.0 early adopters for assessing its alpha, beta and canary releases, providing a ton of invaluable feedback. We sincerely hope you had a great experience using it, and that you will continue to provide feedback on the upcoming pre-releases of Docusaurus 3.0.

At Meta Open Source, Docusaurus is one of our most successful projects. We can't wait to see all the outstanding documentation websites that you will create! Don't forget to submit them to our site showcase!

We are on ProductHunt and Hacker News! 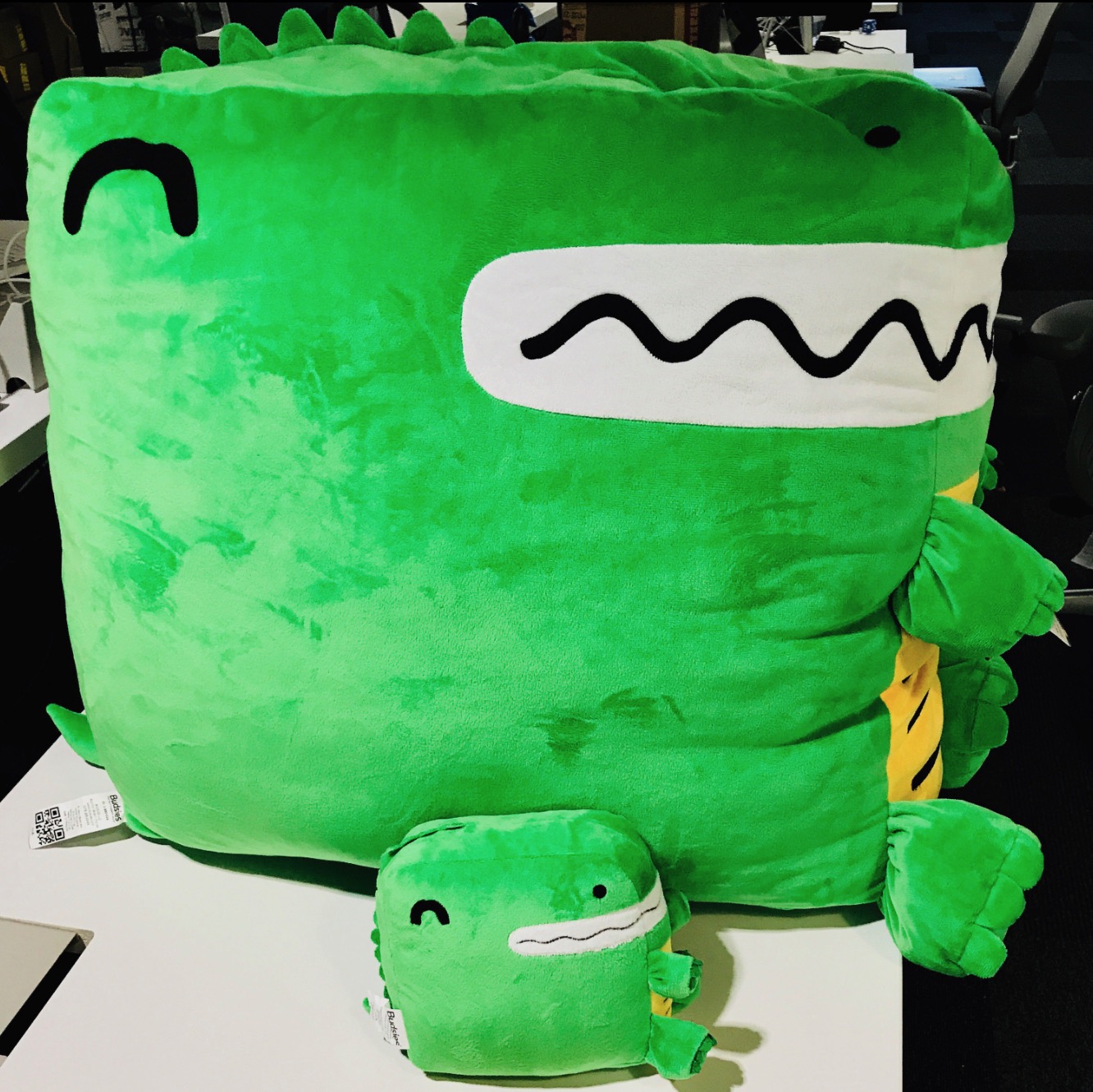